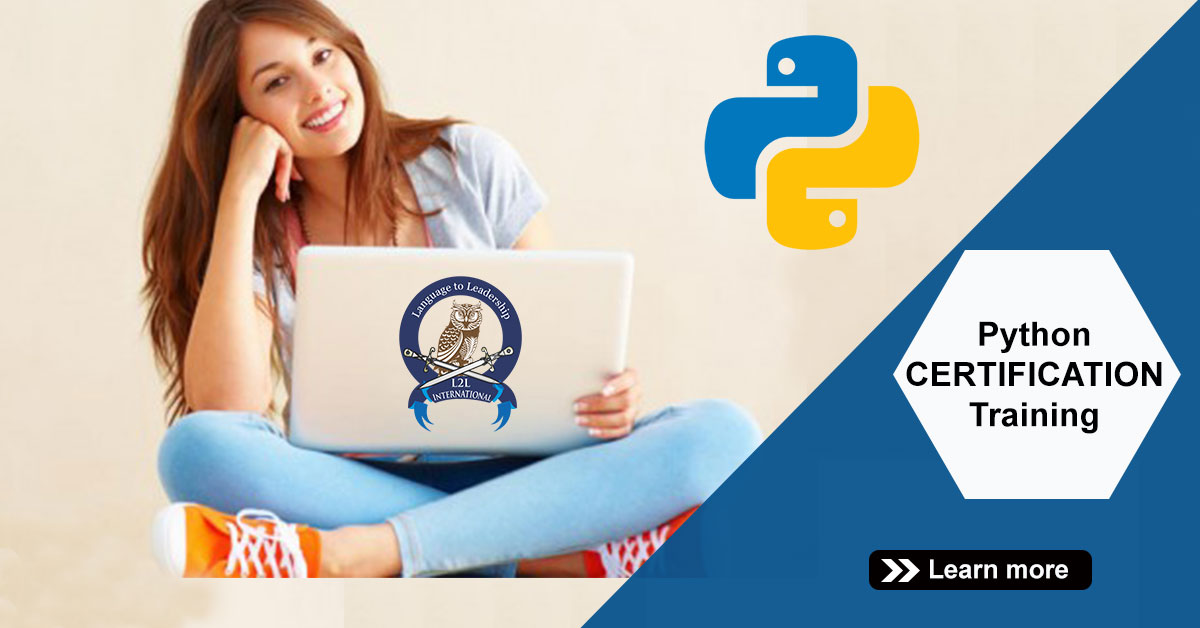 We at L2L International provide the Best Python Training in Noida (Delhi NCR) based on the latest and prospective market requirements and assist our students in securing the job of their preference. L2L International is a well-established brand in Training and Mentoring with an approach more practice-centric, hand-holding the clients and students to succeed in their endeavors and ensuring the attainment of their long-term goals. We have a diverse group of instructors, well-versed in their respective fields, and have immense experience under their belt.

It is a commonly used high-level computer language, essential for the purpose of programming as it integrates with systems more effectively. It runs on all the operating systems like the most common os of Microsoft- Windows, the mighty Linux/Unix, and the luxurious Mac OS, and many more. Lately, python has also been running for .NET and Java virtual machines. Since it entails an open-source license, it can be used for commercial products as well without much hassle. Using this new programming language, a coder can write a particular function in fewer lines of code as compared to any other programming language. Furthermore, it enhances the readability of the code and helps to write crisp and concise programs, irrespective of their scale (large programs or small programs).

The language supports almost all manner of programming models, for example, object-oriented, functional, procedural, and imperative styles. It flaunts automatic memory management and a dynamic type of system. Its massive detailed library lets one develop any program with the utmost ease. Moreover, it is widely used as a scripting language and can also be used in large non scripting programs.

Kick start your career in Programming

Raspberry Pi along with Python

A friend in need, for Startups

Installation of python on different platform

Scope of variables in python

Set and boolean in python

Error and Exception handling in python

About the L2L Python Faculty Members

L2L International has brilliant, highly experienced Python faculty members. Having more than 10 years’ experience in Software Industry. Having a variety of experience in multiple domains (finance, insurance, e-commerce, banking, and telecom). Passionate about new technologies and solving complex problems which is the main highlight of our faculty members. Having vast knowledge of Python in the IT Industry. Our faculties are having expertise in Python programming. Python corporate professionals who are having great experience in managing real-time Amazon web services (AWS) projects.

The Training and Educational Hub

L2L International is the modern epitome of training, with its highly qualified and versatile pool of professional IT trainers and experts. L2L Academy is a temple to education- ample of courses to choose from, the option of varying degrees of proficiency, 24×7 support, and assistance, practical and fun way of instruction.

The team behind the scene

L2L takes a pride in having a highly experienced and learned team of trainers/mentors to assist their clients/students in achieving excellence in their domain. Colonel HS Walia, Founder & CEO is a management professional with 32 years of experience in all-around management functions including Training, Operations, and Stakeholders Engagement. An ISB CEE Alumni recognized as a proven Entrepreneur and Trainer credited with the ability to absorb new techniques and technology to include Digital and Social marketing strategies. Shortlisted by NITI Aayog, Govt. of India as a ‘Mentor of Change’.

In addition, the language and IT wings of the company are headed by the most experienced faculties honored with a number of awards/rewards.

Our tie-ups with various MNCs and Start-ups permits us to aid our students in securing their dream jobs. Furthermore, the dynamic functioning of the academy due to events, drives, and startup and marketing campaigns provides for plenty of internship and job opportunities.

Instructional Support- all round the clock

A highly motivated L2L team slogs an eternity so as to ensure the students’ needs are met in time.

Be the first to review “Python Training in Noida, L2L International” Cancel reply

There are no reviews yet.